The Latest Face of Anti-Catholic Hate 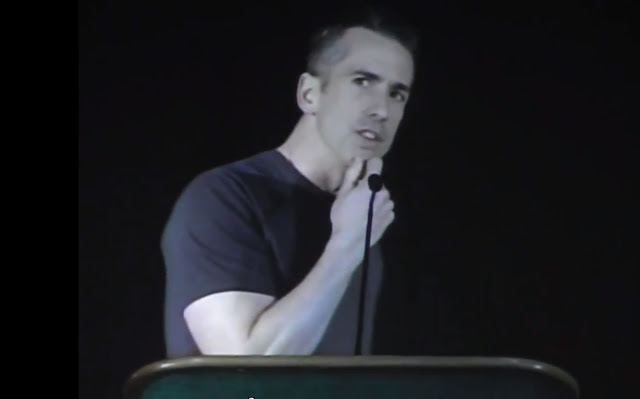 Thanks to the gospel of tolerating all things, we now face a new, emboldened species of Catholic-haters:  The homosexual lobby.  To illustrate our point, we give you "anti-bullying" crusader Dan Savage.


Invited to speak at a National High School Journalism Convention, Mr. Savage did not mince words as you'll see in the video below:


With that special brand of affected-sophistication, Mr. Savage declared:

Savage goes on to call the Bible "a radically pro-slavery document".  He then quotes St. Paul out of context as if to assume that telling a slaveowner to treat his slaves humanely equates with condoning slavery.  In fact, everything Savage quotes from the Bible about is taken out of context and explained only in a manner that invites mocking and ridicule.


As you can see, at least some of the students--quite a few, actually--had enough self-respect and intuitive knowledge to flee when he began to trash Christianity's sacred texts, which exposes one of the fatal flaws of anti-bullying "experts" like Savage:  He verbally bullies the students himself:


"It's funny how someone who's on the receiving end of beatings that are justified by the Bible...how pansy-assed some people react when you push back."

Now someone who makes his living as a Professional Victim for Gay Rights has surely been called a "pansy" or worse, which begs the question for Mr. Savage:  Do two wrongs make a right?


It's high time we recognize the truth and speak it with clarity:  Christianity does not condone bullying homosexuals.  The Catechism of the Catholic Church goes so far as to say:


2358 The number of men and women who have deep-seated homosexual tendencies is not negligible. This inclination, which is objectively disordered, constitutes for most of them a trial. They must be accepted with respect, compassion, and sensitivity. Every sign of unjust discrimination in their regard should be avoided. These persons are called to fulfill God's will in their lives and, if they are Christians, to unite to the sacrifice of the Lord's Cross the difficulties they may encounter from their condition.

Of course, the cause of Truth is not helped by fundamentalist Protestant wing of Christianity who are doing all they can to reinforce the public image of Christian intolerance.  But let's be real:  Even the news media recognizes the supremacy of the Catholic Church when it comes to moral issues (No network interrupts it broadcasts to report the death of the Archbishop of Canterbury or the President of the Southern Baptists Convention).   The Catholic Church stands alone as the only Church that does not change its teachings to suit the age--which is precisely why CATHOLIC Christians are the more focused target of homosexuals and they will do anything they can to stop the Church.


And Mr. Savage himself grew up in the Catholic Church--unfortunately, it was the post-Vatican II American version of Catholicism that equivocated on uncomfortable moral issues (his mother went to a priest when she found out he was homosexual, only to have the priest inform her that he himself was gay and it was "better" for her son).


So what is the Truth?  It is the complete message of Jesus Christ and the authoritative teaching of His Church.  For most of us living in this age of post-Vatican II rupture, we have heard plenty about treating homosexuals with respect and compassion--and we should.  However, our bishops and priests tend to be more timid about the other part of the message:


2357 Homosexuality refers to relations between men or between women who experience an exclusive or predominant sexual attraction toward persons of the same sex. It has taken a great variety of forms through the centuries and in different cultures. Its psychological genesis remains largely unexplained. Basing itself on Sacred Scripture, which presents homosexual acts as acts of grave depravity, tradition has always declared that "homosexual acts are intrinsically disordered." They are contrary to the natural law. They close the sexual act to the gift of life. They do not proceed from a genuine affective and sexual complementarity. Under no circumstances can they be approved.

So we have to know our faith and speak the WHOLE truth.  Unfortunately, we live in an age when most people barely have the attention span to read a bumper-sticker, so many will not listen.  That's where prayer comes in.


One thing this video makes abundantly clear:  Homosexuals no longer want tolerance.  They've already got it in spades.  They want approval and they want no limitations on anything they do, publicly or in private.  They will use the very hatred and violence they purport to condemn to get what they want.


Make no mistake:  The homosexual lobby wants to silence the Catholic Church and they will stoop to any means to make that happen.


If Mr. Savage had any real courage, he would debate the issue of homosexuality with a Catholic apologist like Patrick Madrid or, better yet, with someone like Dr. Joseph Nicolosi, who has spent most of his professional life studying homosexuality and treating the people who suffer with it.


We must learn our faith in its completeness and we must speak the truth in love, but fearlessly.  The "anti-bullying" homosexuals are more than ready to bully the Catholic Church out of existence.


One more thing:  Savage has repeatedly said that he was once in the Catholic seminary.  All of us should pray in thanksgiving that he never made it to ordination.  We have enough wolves guarding the sheep already.

The Danger of Bringing Church Dogma to Catholic Schools

De LaSalle High School in Minneapolis, a Catholic high school,  is at the center of a controversy that magnifies the problem that Western Catholics are just beginning to realize:  We have at least two generations of Catholics who have no clue what the Church teaches, cannot support or defend the Church and are actually willing to attack their own Church to conform to the popular culture.


De LaSalle hosted an assembly where archdiocesan representatives presented the Church's position on marriage.  However, students took offense at several points made by the archdiocese.  Among the points that offended these :


2)  Marriage is a sacrament that takes place between a man and a woman and excludes homosexual couples.


3)  Homosexuality is unnatural and disordered.


High school students, being what they are, spoke up for what they believed in, and in this case, they didn't believe in Catholic teaching.   It is painfully obvious that the messages of secular society resonate far more deeply with these kids than what the Church teaches. 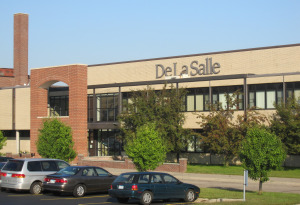 Of course, this IS Minnesota, which has given us Walter Mondale, St. John's Abbey and a plethora of embarrassingly bad bishops throughout the 70's and 80's, so no one should be surprised that the students "formed" by a school in an archdiocese that is still cleaning itself up (thanks be to God and Archbishop Nienstedt).  But some of the remarks made by students and parents are so troubling that they cry out to be addressed, and address them I will.
•  Student Matt Bliss took offense at the "implication" that adopted kids are "less than kids with two parents of the opposite sex."
But that's not what they said.  Children with only one parent simply don't have the same level of opportunity that children with two parents have.  It wasn't a put-down.  It was a statement that recognized that two parents bring more to a child than one does.  Two complimentary personalities working together, under normal circumstances, cannot help but offer more to a child than one person.  The complimentary contributions of two parents of the opposite sex broaden the world view and the emotional space that a child lives in.  Many single people generously adopt children and they are to be commended for doing so.  That doesn't change the fact that the best scenario is a two-parent home.
•  Lydia Hannah, another student, took offense that homosexuality was compared with bestiality.
If we can put our emotions away for a few moments and look at the two "lifestyles" with cold rationality, homosexuality and bestiality are both disorders and perversions of the sex act.
The sex act is procreative and unitive.  It creates life and brings two people of the opposite sex closer together into "one flesh"--which becomes a literal fact when a new life is created. Homosexuality does not create new life.  It is focused on pleasure, not the self-giving of the marriage vocation.  Bestiality is what it is.  If homosexuality is "liberated" and becomes a societal norm, what is to stop us from moving "forward" and mainstreaming other deviations from the human norm such a polygamy, bestiality and pedophilia?  According to the terms of the modern liberal, to outlaw such sexualities would be an unjust violation of one's civil rights.
But what can one expect from students when their own parents feed them the gospel of anything goes?   Miss Hannah's father, Paul, said that he was "very proud" of his daughter and the other kids who spoke out against the diocese.  Which begs the question:  Why are parents like Mr. Hannah shelling out their hard-earned money for Catholic school tuition when they refuse to accept the Catholic Church's position on morality?
The Minnesota paper that ran the story also ran hundreds of comments from readers.  Again, this is Minnesota, so it is no surprise that the majority of comments support the dissenting students and denounce the diocese.  Among them are accusations of attempting to brainwash students and calls to stop supporting the Church financially.
Brainwashing?  Really?
If a married couple (or single parent--we musn't offend anyone who is the exception) sends their children to a Catholic school, isn't it reasonable to expect that such a school would actually TEACH the Catholic Church's position on moral issues?  As offensive as that may sound to the enlightened PBS donors of Minneapolis, I think it is safe to say that the students are not being brainwashed by the archdiocese.  The story itself makes it quite clear that they have developed a reactionary resistance to any message that contradicts a world view formed by a pop culture of celebrity spokespersons, MTV, crude movies and television and sexual licentiousness.  How could the Church possibly compete with all of these other forces?
The only way the Church could possibly compete for the hearts and minds of young people against such an overwhelming zeitgeist is by having parents willing to radically impart the faith in a completely sacrificial way and protect them from the REAL brainwashing that our culture of entertainment and self-seeking pleasure imparts.
If people disagree with the Church's position on homosexuality (or anything else) they are certainly free to withhold money.  However, I would suggest to any dissenting Catholics who think their financial blackmailing would work to consider this:  The Catholic Church has endured 2,000 years of persecution. Emperors, kings and dictators have all vowed to stamp out the Church and failed.  Corrupt bishops and priests have stained the Church's reputation and hurt it from within, but the Church stands unchanged in Her positions on eternal truths.
Jesus Christ promised St. Peter that the gates of Hell would not prevail against His Church.  Angry social elites, homosexual lobbies and bureaucrats will not prevail against Her either.
As for the kids in this drama?  It's not their fault.  We can join Jesus this Holy Week in praying, "Forgive them Father, for they know not what they do."  And please pray for Archbishop Neinstadt too.  He has a long, hard road ahead of him and a lot of skulls full of mush to set straight.
Posted by Keyser Soze at 9:22 PM 7 comments: