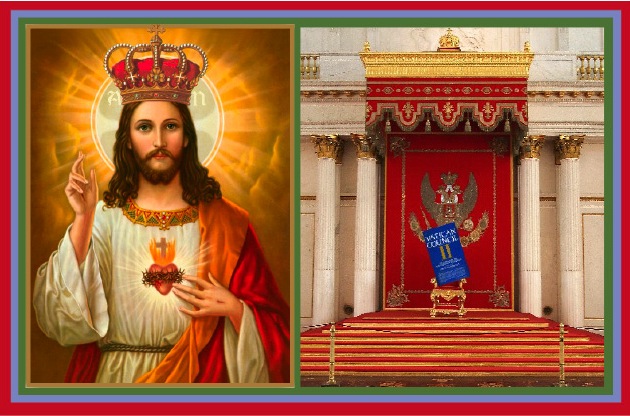 Which belongs on the throne?
There's a definite sense of expectation in the air after the yesterday's meeting between SSPX Bishop Bernard Fellay and CDF head Cardinal Levada.  It is a well-known fact that from the beginning of his pontificate, Pope Benedict has dearly wanted to end the rift with the Society of St. Pius X and prevent a full-blown schism.  It is also believed that the pope has a certain admiration for them, although he is careful not to express it.  This admiration has revealed itself on a few occasions, such as Benedict's reference to Archbishop Lefebvre as "this great man of the Universal Church."
So, for now, we wait to see if Bishop Fellay will indeed sign the doctrinal preamble presented to him by Cardinal Levada.  The actual content of this preamble remains a mystery, but it would be hard to imagine the pope sending anything to the SSPX for approval when he knows clearly where they stand.  And that sticking point thunders in every press release about the ongoing conflict:  The SSPX does not accept Vatican II.
So again we ask the question: Can one be a Catholic in full communion with the Church while rejecting Vatican II?
Councils are usually called to settle disputes within the Church or define dogmas or refute heresies.  Vatican II was unlike any other council in history, because it did none of the above.
Pope Benedict was there.  He knows Vatican II as well as anyone possibly could. 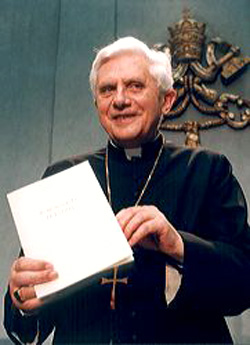 "One of the basic discoveries of the theology of ecumenism is that schisms can take place only when certain truths and certain values of the Christian faith are no longer lived and loved within the Church. The truth which is marginalized becomes autonomous, remains detached from the whole of the ecclesiastical structure, and a new movement then forms itself around it."


It cannot be denied that after Vatican II many truths and values of the faith stopped being lived and loved in the Church. Fasting before Communion, frequent Confession, religious attire for priests and nuns, the importance of avoiding mortal sin, abstaining from meat on Fridays and many other disciplines, teachings and traditions were suddenly tossed aside, de-emphasized or became the objects of mockery and jokes.  This atmosphere of disdain for all that Catholics once practiced certainly invited a response, and that is just what Archbishop Lefebvre and his followers gave us.

This response, as noted by Cardinal Ratzinger, fed a hunger that too many of our shepherds ignored:

"We must reflect on this fact: that a large number of Catholics, far beyond the narrow circle of the Fraternity of Lefebvre, see this man as a guide, in some sense, or at least as a useful ally. It will not do to attribute everything to political motives, to nostalgia, or to cultural factors of minor importance. These causes are not capable of explaining the attraction which is felt even by the young, and especially by the young, who come from many quite different nations, and who are surrounded by completely distinct political and cultural realities.  Indeed they show what is from any point of view a restricted and one-sided outlook; but there is no doubt whatever that a phenomenon of this sort would be inconceivable unless there were good elements at work here, which in general do not find sufficient opportunity to live within the Church of today."

So Cardinal Ratzinger admitted that even young people were hungry for the tradition that was being denied to them and that some good was being done.  This is important because he is also saying that tradition cannot be just discarded.  It has value.

“For all these reasons, we ought to see this matter primarily as the occasion for an examination of conscience. We should allow ourselves to ask fundamental questions, about the defects in the pastoral life of the Church, which are exposed by these events. Thus we will be able to offer a place within the Church to those who are seeking and demanding it, and succeed in destroying all reason for schism. We can make such schism pointless by renewing the interior realities of the Church."

Those bishops probably didn't want to hear this part.  Cardinal Ratzinger told them that it was their own fault, that they, as bishops, had created "defects in the pastoral life of the Church" and that it was completely unnecessary.  In other words, he told them that the Church had shot itself in the foot since Vatican II.  And just how did this happen?  Ratzinger was blunt:

"While there are many motives that might have led a great number of people to seek a refuge in the traditional liturgy, the chief one is that they find the
dignity of the sacred preserved there. After the Council there were many priests who deliberately raised ‘desacralization’ to the level of a program, on the plea that the New Testament abolished the cult of the Temple: the veil of the Temple which was torn from top to bottom at the moment of Christ’s death on the cross
is, according to certain people, the sign of the end of the sacred. The death of Jesus, outside the City walls, that is to say, in the public world, is now the true religion."

Cardinal Ratzinger then emphasizes the importance of Christianity as a source of purification and repentance and that we, as Jesus' followers, are a people set apart, not in conformity with the world:

"There is no doubt that, with these theories and practices, they have entirely disregarded the true connection between the Old and the New Testaments: It is forgotten that this world is not the Kingdom of God, and that the “Holy One of God”(John 6:69) continues to exist in contradiction to this world; that we have need of purification before we draw near to Him; that the profane, even after the death and the Resurrection of Jesus, has not succeeded in becoming ‘the holy’.  The Risen One has appeared, but to those whose heart has been opened to Him, to the Holy; He did not manifest Himself to everyone. It is in this way a new space has been opened for the religion to which all of us would now submit; this religion which consists in drawing near to the community of the Risen One, at whose feet the women prostrated themselves and adored Him."

The Cardinal then explains that the Mass is the Church's most sacred rite.  The very de-sacralization  of this rite created the prohibited hunger for tradition:

"The liturgy is not a festivity; it is not a meeting for the purpose of having a good time. It is of no importance that the parish priest has cudgeled his brains to come up with suggestive ideas or imaginative novelties. The liturgy is what makes the Thrice-Holy God present amongst us; it is the burning bush;  It is the Alliance of God with man in Jesus Christ, who has died and risen again. The grandeur of the liturgy does not rest upon the fact that it offers an interesting entertainment, but in rendering tangible the Totally Other, whom weare not capable of summoning. He comes because He wills. In other words, the essential in the liturgy is the mystery, which is realized in the common ritualof the Church; all the rest diminishes it. Men experiment with it in lively fashion, and find themselves deceived, when the mystery is transformed intodistraction, when the chief actor in the liturgy is not the Living God but the priest or the liturgical director."


“It is a necessary task to defend the Second Vatican Council against Msgr. Lefebvre, as valid, and as binding upon the Church. Certainly there is a mentality of narrow views that isolate Vatican II and which has provoked this opposition. There are many accounts of it which give the impression that, from Vatican II onward, everything has been changed, and that what preceded it has no value or, at best, has value only in the light of Vatican II."

So the Cardinal says that the Council is binding upon the Church.  One might argue that as Prefect of the Congregation for the Doctrine of the faith for John Paul II, Cardinal Ratzinger would have to say that.  However, his next statement is almost a contradiction:

“The Second Vatican Council has not been treated as a part of the entire living Tradition of the Church, but as an end of Tradition, a new start from zero. The truth is that this particular Council defined no dogma at all, and deliberately chose to remain on a modest level, as a merely pastoral council; and yet many treat it as though it had made itself into a sort of superdogma which takes away the importance of all the rest."


•  Was a merely pastoral council
(so much for Vatican II "reforms")


•  Cannot be invoked to the exclusion of what came before it


Cardinal Ratzinger said that it is binding upon the Church to accept the Second Vatican Council, and all the new dogmas that came with it:  Namely, NONE.


Let us recall now that a dogma is a belief or doctrine that must be held by all believers.  So one might argue Cardinal Ratzinger, the man who is now our pope, was telling these bishops that the Church must accept the teachings of the Council that didn't teach us anything...at least anything that we are required to believe or accept.


Let's put it another way:  10  + 0 = 10.    Let's say that 10 stands for the perennial teachings of the Church and 0 represents the dogmas defined by Vatican II.  We must accept the zero, but we must also accept the 10.  Certainly John XXIII had every right to call Vatican II, so we can accept that.  We can certainly accept the fact that the Church has its councils.   So can we accept the whole equation?  If so, it still leaves us with 10!  The trouble is, we've had 40 years of shepherds throwing out the 10 and delivering 0 to their flock.


Again, it would be hard to imagine Pope Benedict giving an ultimatum to the SSPX that contradicted their stance, and their stance is that they do not accept the teachings of Vatican II.  So if the teachings amount to ZERO, what does that mean?


My money says that the pope offered them 10.


So they don't accept the "reformed" liturgy of Paul VI?  So what?  There are already other religious orders who only offer the Tridentine Latin Mass, so that should pose no problem.  Besides, the new Mass was not mandated by Vatican II, never offered during Vatican II and only came after Vatican II,  developed by a committee called by Paul VI.  True, it is invoked as a by-product of Vatican II, but the document invoked, Sacrosanctum Concilium, is vague at best and also calls for the preservation of all liturgical traditions and Latin.  In this sense, Archbishop Lefebvre and his followers are very much Vatican II Catholics!


Catholics are members of the Church founded by Jesus Christ, who remains the same yesterday, today and forever.  Does our post-Vatican II Church reflect the reality of its Divine Founder?  Here's what Cardinal Ratzinger told the bishops gathered in Santiago:


"All this leads a great number of people to ask themselves if the Church of today is really the same as that of yesterday, or if they have changed it for something else without telling people. The one way in which Vatican II can be made plausible is to present it as it is; one part of the unbroken, the unique Tradition of the Church and of her faith."