Lorene Scafaria's Seeking a Friend for the End of the World is an accurate reflection of where we are.  And for that reason alone, this movie should scare the hell out of every decent Catholic on the planet.

The film begins with Dodge (the ironically-named hero of this "light romantic comedy") in his parked car at night with a shocked looking woman, listening to a news report that a shuttle mission to destroy a large astroid headed for earth has failed and nothing will stop it from completely destroying all life on the planet in approximately three weeks.  The woman (his wife, we later find out) runs from the car and never returns.

Portrayed by Steve Carell, (who contends with Greg Kinnear as today's best onscreen everyman) Dodge returns to his NYC apartment and his depressing insurance job. The next night he finds Penny (Keira Knightley) a too-easy-going (if you know what I mean) British immigrant who is weeping on the fire escape.  He invites her in and she shares her despair that she missed her flight back to the UK and will never see her family again.  She then lights a reefer and sleeps for two days.  When she awakens, Dodge escorts her to her apartment where she hands him his mis-delivered mail that she has been holding for the last three years.  Among the letters is a "I wish I'd never left you" letter from his high school sweetheart.

Dodge attends one last party with his friends, who have decided that anything goes--and I mean ANYTHING.  His best friend's wife comes on to him, "Nobody belongs to anybody anymore" she says.  Parents are giving their kids mixed drinks, and otherwise straight, respectable people are trying heroin for the first time.

As the Big Apple erupts into rioting and chaos, Dodge persuades Penny to leave with him, promising to take her to someone he knows with a plane if she will help him find his lost love.

From this point, the road trip romp leads them to a terminally ill man who has hired an assassin to kill him in advance of the asteroid's impact, survivalists in an underground bunker, a TGIFriday's lookalike restaurant that has devolved into a one-stop-hedonism shop, and his old girlfriend's parents house (searching for her address).  Dodge forgoes meeting his old flame because he's decided that he has at last found his true love, Penny.  And the feeling is mutual.

Finally Dodge surprises Penny by taking her to his estranged father's (Martin Sheen) house.  He makes peace with his dad, lets Penny dope herself to sleep again and places her in the passenger seat of his dad's Cessna, while his dad takes off to take her home (Really?  A single-engine Cessna across the Atlantic?) 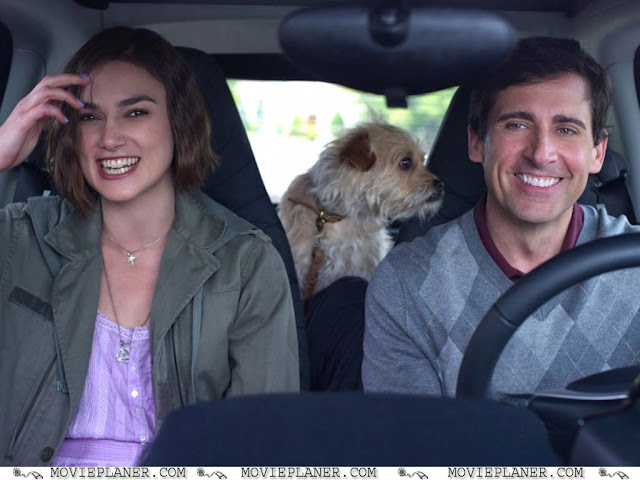 At this point, Dodge sadly returns to his apartment with his last keepsake of Penny, her beloved record albums (heavy emphasis on Herb Alpert).  He lays on the floor, falling asleep to the Walker Brothers' The Sun Ain't Gonna Shine Anymore but is abruptly awakened when the electricity shuts down,  suddenly killing all the lights and the stereo too.  Penny returns in the window, scolding him for sending her off with his dad, who turned around and came back at her insistence.  They lay on his bed looking at each other as ongoing explosions signal the end that flashes out brightly with each of them smiling at each other with rapt devotion.


Then what's so scary?


What's scary is that nobody in this film believes in anything, at least not in anything substantial.  Penny's religion is her records.  Dodge's religion is his belief in true love (and as a true lover, he lets his newfound love go when it is hardest).  But other than that, no one shows any concern for the state of their souls.  There are only passing references to God, almost joking in tone.  Only once, do we have any relief from this naturalist nightmare, a brief scene of families at a beach being baptized in the ocean by a clergyman of some unidentified denomination.  It's the most human moment of the movie, seeing families and strangers sharing their day in conversation with each other.  As for everyone else in the film, the only thing that matters is squeezing as much gratification into the last remaining moments as they can.


There is not one iota of concern (or even consciousness) from any character that they are about to come face-to-face with their maker.


And that is what is so scary.  This film IS accurate.  We as a society don't believe in anything anymore.


A society that believes in nothing has nothing to lose.  I don't think we appreciate what a dangerous position this puts us in.


Let us pray we don't find out very soon.
Posted by Keyser Soze at 9:08 AM